Rain D. may have been annoying with all his knockbacks, but Midnite D. makes those knockbacks terrifying, with a Shield that regenerates for each and every one of them. The Shield is relatively weak when compared to others, but the effect builds up due to how many times it regenerates, each time possibly blocking a devastating hit that would have marked his demise, or stopping a negative effect from being applied, or allowing Midnite D. to attack without being interrupted. Otherwise, he behaves in much the same way as Rain D.

Normally, Shield Piercing Cats would be the best answer to a Shield, but not if the Shield is so weak and constantly being re-applied. For this reason, it is best to just bring Cats with huge damage per hit and do whatever can be done to skip knockbacks, thus greatly reducing Midnite D.'s effective HP. 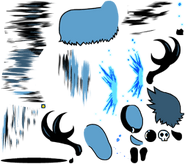