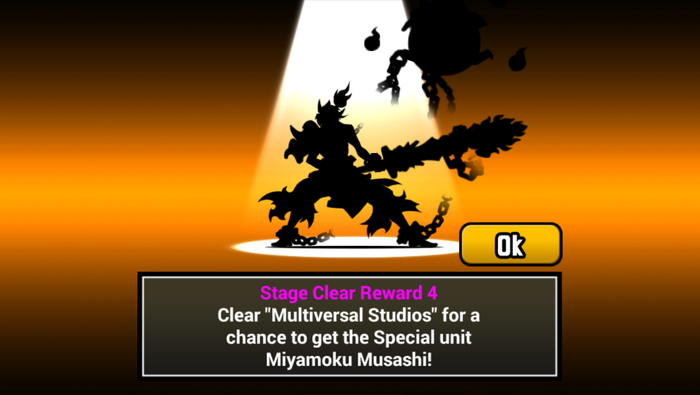 This article is about the Cat Unit. For the enemy, see Inumusha (Zombie).
Not to be confused with Musashi Miyamoto.

Miyamoku Musashi is a Special Cat that can be unlocked when beating Multiversal Studios. True Form added in Version 7.0 increases health and damage, grants Zombie Killer, Curse immunity and a chance to freeze Relic enemies.

Evolves into Heroic Musashi at level 10.

Musashi is an overall decent ranged anti-wave unit. He does a good job against most wave attackers, like Pigeon de Sable, Kory, and even Hermit Cat, provided you have a decent lineup. Unlike Ururun, his attack rate is too slow for him to fend for himself, meaning you must protect him well when using him in stages like Tiny Fists.

The most important parts about him in Normal and Evolved Form are his recharge time and wave immunity, as you will usually be able to get another Mushashi out when the original dies. Unless you happen to have certain Talented Rare or Uber Rare Cats, his wave immunity is important across the entire game, and only replicated by a Talented Dancer Cat in restriction stages. This also applies to his True Form.

Awakened Mushashi gains the Zombie Killer, Freeze Relic, and Immune to Curse abilities, along with increased health and attack power. Zombie Killer is an odd ability as he does not fare well against them, since common Zombies will usually burrow into his range and knock him back, something exacerbated by his low KB count. He is, however, one of the only non-Uber Zombie Killers to outrange Cadaver Bear.

His freeze ability against Relics isn't the worst, and serves as extra support, provided he isn't outranged by the Relic enemy in question. The duration of his ability is a nice 3 seconds, which serves as reprieve for that amount of time. Immune to Curse serves to make it absolute that he will not lose his ability, but the largest problem is that his activation chance is very low, at only 30%, meaning the effective uptime is often much lower and cannot be relied upon.

His attack and health increases are very good, and allow him to remain semi-relevant to the Uncanny Legends meta. But, most importantly, this allows him to dominate in 4-Crown Stories of Legend, which was a bit of an issue beforehand, meaning you will likely use him for Stories of Legend more than anything else. If you are looking for a good use of your Elder Catfruit and want to get a Cat that performs well in Uncanny Legends or for general use, then investing in Slapstick Cats, Awakened Mina, or Awakened Ururun would be a better idea.

*First stats are 1st form's initial, second and third stats include 300% Empire of Cats Treasures; recharge time may vary.
*Time between attacks is the time from the attack's execution to the start of the next attack (includes backswing).
*For units with multi-hit attacks, attack animation is the part of the animation leading up to the first hit.
*Fruit Treasures not included.
*See this section to calculate Miyamoku Musashi's stats.