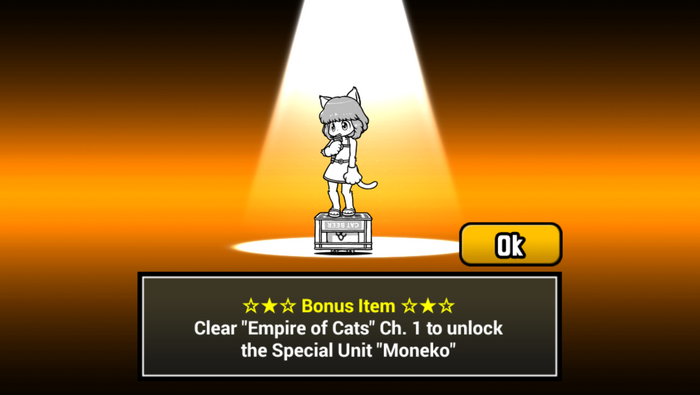 Moneko is a Special Cat that can be unlocked by clearing Empire of Cats Chapter 1. Though in the Nintendo 3DS version Moneko is a Super Rare Cat and can be unlocked via the Rare Cat Capsule. True Form added in Version 11.0 decreases recharge time, increases HP and Critical chance, and gains the Mini-Wave ability. Unlike Valkyrie Cat and Bahamut Cat, she isn't considered a Legend Cat as she can upgrade past level 40.

Before 3.2.0, she could only be unlocked after 10 people had input your invitation code.

Evolves into Miss MONEKO at level 10.

Evolves into Superstar MONEKO at level 30 using Catfruit and XP.

As Moneko is very slow and has short-ranged attacks, she'll be inefficient in most of the stages, as her 15% chance of Critical will rarely be enough, but she can at least kill the CyberFace in Steel Visage, if nothing better is available. Her main use comes from her Combos, as Sister Act offers a good damage improvement for just 2 units, plus it can be combined with Artist Cat, who might easily be in the army regardless, for an extra Worker Cat level, which never hurts. If Sister Act is combined with another 2-slot attack Combos like Brave Cutter, the resulting damage boost (+20%) will be higher than using 4 slots for an Attack Up (M) instead (+15%).

With appropriate timing and planning, Moneko can be useful in early stages that feature 1-2 Metal enemies and can even be used against Super Metal Hippoe. However, she is easily outclassed by any Critical Hitters obtained through the Rare Cat Capsule, as well as Cyclone drops such as Catornado, Waitress Cat and even Space Cat.

This True Form offers too little too late, adding a mini-wave, reducing her recharge time and improving her Critical chance a little. Superstar MONEKO still loses out against competing alternatives by the time it is obtainable and mostly acts as a trophy of game progression. She can still help against Metal Doges, Croconators, Koroniums and, to a degree, Metal One Horns, if necessary. Her Critical mini-waves do have a niche in mixed stages, as she doesn't need to specifically target a Metal enemy for her mini-wave to take them out. Granted, with her low attack stat, this niche is unreliable and only useful in a few stages.

*First stats are 1st form's initial, second and third stats include 300% Empire of Cats Treasures; recharge time may vary.
*Time between attacks is the time from the attack's execution to the start of the next attack (includes backswing).
*For units with multi-hit attacks, attack animation is the part of the animation leading up to the first hit.
*Fruit Treasures not included.
*See this section to calculate Moneko's stats.

Moneko was a Dark-type support character in Nyanko Defence Force.

Moneko's dress is a costume in Princess Punt obtainable during the collab between the two games.

Description:
にゃんこ界のアイドルとしてその名を馳せる少女。新たなファン獲得のため、人間族の侵略に協力する。
もねこファンクラブなるものが存在し、セレスちゃんファンクラブと熾烈な争いを繰り広げている。
A girl who is an idol well-known in the Cat World. Helping with the invasion of the human race to acquire new fans.
There is a thing called the Moneko fan club, and it is in a fierce battle with the Celesse-chan fan club.
Quotes:
ハングリーであれ。バカであれ。そのが私のモットーにゃ！
Stay hungry. Stay foolish. That is my motto!