Mr. Ninja is a Special Cat obtained from the Challenge Campaign between PONOS games Battle Cats and Mr. Ninja!! Fever. The way to get this cat is to clear the first gate in adventure mode in the game Mr. Ninja!! Fever. The evolved form name of this unit during first inclusion in data was Lily before changed to Mint in release.

Evolves into Mint at level 10.

*First stats are 1st form's initial, second and third stats include 300% Empire of Cats Treasures; recharge time may vary.
*Time between attacks is the time from the attack's execution to the start of the next attack (includes backswing).
*For units with multi-hit attacks, attack animation is the part of the animation leading up to the first hit.
*Fruit Treasures not included.
*See this section to calculate Mr. Ninja's stats. 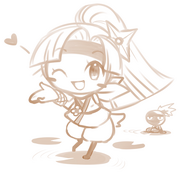 by たっぷる
Add a photo to this gallery

Retrieved from "https://battle-cats.fandom.com/wiki/Mr.Ninja_(Special_Cat)?oldid=496179"
Community content is available under CC-BY-SA unless otherwise noted.