Not to be confused with Aku Researcher.

Almost all stages below ★10 difficulty

This enemy appears in almost any level when the player takes too much time, normally when the player's timed score reaches 0. She is not a threat and is mostly just there to signify that you are taking too long, however she still does attack, dealing one damage per hit. In some levels, there are different conditions for how and when Ms. Sign spawns, and in an even smaller selection of levels, they indicate Assassin Bears that are about to be spawned:

You can use almost any unit to beat Ms. Sign, as her attack power is laughably low, and her health goes down very quickly, despite it being above most other Empire of Cats Enemies.

There is a "cheesing strategy" for many levels (notably Dark Souls and Deathhawk) with weak to mid-level peons involving Ms. Sign. Normally, it exploits her ten thousand knockbacks. If you wait for Ms. Signs to stack up until the enemy limit is reached (10 in the aforementioned stages), no other enemies will, including the boss. From there you can use Wall Cats to knock her back, and then summon your high-damage attackers. Note that this takes 75 minutes WITH a Speed Up, so it should only be used as a last resort.

Ms. Sign appears as a League 4 trap in The Burgle Cats. 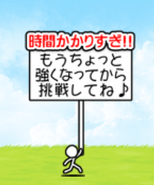