Mystica is an Uber Rare Cat that can be obtained by playing the Rare Cat Capsule during the Merc Storia Collaboration Gacha.

Evolves into Mystica CC at level 10.

This unit's specialty is her 690 range that qualifies her as a Super-Backliner that can outrange many enemies. Her main usage is for mid-game where you need a unit that can outrange enemies such as THE SLOTH, Master A., Camelle, etc. Although her range is great, her generalist usage is very much limited to early-game and mid-game. Her attack rate is ridiculously long (13 seconds) and her DPS is the lowest among massive range units such as Cosmo and Aphrodite, even against black enemies. She also cannot outrange Tackey nor Director Kurosawah which greatly limits her usage against stages with those enemies.

Overall, she is a great unit to have if you don't have other super backliners such as Madoka Kaname or Aphrodite. Otherwise, she is a very lackluster unit in terms of DPS that will probably not be worth investing in.

*First stats are 1st form's initial, second and third stats include 300% Empire of Cats Treasures; recharge time may vary.
*Attack frequency is the time between an attack is delivered and the next.
*For units with multi-hit attacks, attack animation is the part of the animation leading up to the first hit.
*Fruit Treasures not included.
*See this section to calculate Mystica's stats. 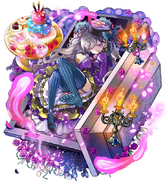