Neneko is a Super Rare Cat that can be unlocked by playing the Rare Cat Capsule when "Limited Edition" is part of the current pool.

Evolves into Miss NENEKO at level 10.

+ 15% chance to perform a Critical Hit

Neneko can be used in much the same way as Moneko, though she is only half as strong as her more confident sister. She makes up for her relative weakness with range, however; roughly twice as high as Moneko's, it allows Neneko to outrange every Metal enemy in the game except the few event exclusives. Naturally, this means that she can keep a greater distance from non-Metal enemies as well.

Combined with Moneko, she forms the Sister Act Cat Combo, increasing the attack power of all units by 10%. While it is only 2/3rds as powerful as Cool Japan, it requires half as many units. This makes the combo safe to bring in any stage that doesn't require a very specialized set of units; or stages that are time-restricted and do not provide money, such as the Ranking Dojos of the Catclaw Dojo. Similarly, Brave Cutter can be just as helpful within different contexts. Sister Act and Brave Cutter together take up the same number of slots as Cool Japan while providing a greater total boost to attack, boosting the attack of all units by 20% instead of the 15% of Cool Japan.

*First stats are 1st form's initial, second and third stats include 300% Empire of Cats Treasures; recharge time may vary.
*Attack frequency is the time between an attack is delivered and the next.
*For units with multi-hit attacks, attack animation is the part of the animation leading up to the first hit.
*Fruit Treasures not included.
*See this section to calculate Neneko's stats.

A special pool including Neneko 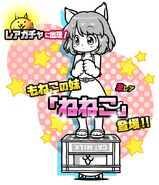 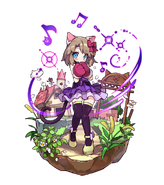