Nimue is an Uber Rare Cat created by a collaboration event between Million Arthur and Battle Cats. This unit can be unlocked by playing the Rare Cat Capsule during the event period.

*First stats are 1st form's initial, second and third stats include 300% Empire of Cats Treasures; recharge time may vary.
*Time between attacks is the time from the attack's execution to the start of the next attack (includes backswing).
*For units with multi-hit attacks, attack animation is the part of the animation leading up to the first hit.
*Fruit Treasures not included.
*See this section to calculate Nimue's stats. 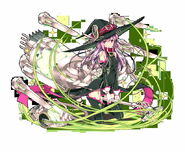 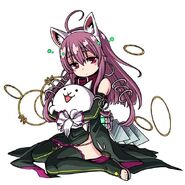 Nimue and Cat
Add a photo to this gallery

Retrieved from "https://battle-cats.fandom.com/wiki/Nimue_(Uber_Rare_Cat)?oldid=504342"
Community content is available under CC-BY-SA unless otherwise noted.