This article is about the Cat Unit. For the enemy unit, see Flying Ninja Cat (Enemy).

Ninja Cat is a Special Cat that can be purchased for 50 Cat Food in the Upgrade Menu after completing Philippines/Oita in Empire of Cats Chapter 1. True Form decreases deploy cost and movement speed. As of Version 6.0, his Normal and Evolved Forms do 2 hits per attack.

Evolves into Flying Ninja Cat when obtained from Ninja Awakens! (may drop on the first stage but guaranteed on the second) and is at level 20 or above.

Ninja Cat is extremely potent early on, having straight-up better stats than Axe Cat. It alone can carry through the whole first, second and the early portion of the third chapter, but this cat's use decreases quickly afterwards, quickly becoming outclassed by Dark Cat (as they gets + levels) and Crazed Axe Cat, two cats that aren't even very strong to begin with.

Ninja Cat is also part of the Cool Japan Combo, which provides a medium (15%) attack boost to all your units.

Later on and even in True Form, Ninja Cat still has such a low health that, even against Reds, this unit's use is not recommended at all.

Flying Ninja Cat becomes slower and cheaper. Since his stats are unsalvageable by the time this form is unlocked, all that matters is its quality as a disposable meatshield, which is decreased by the slower speed. At the very least, however, his cost becomes closer to that of a unit that is expected to die in one hit, but it is still too high. Overall, this form's only purpose is making talents available for this unit.

Flying Ninja Cat's usage as a meatshield is improved dramatically by its Dodge talent as, with it, Flying Ninja Cat goes from being little more than a more expensive Mohawk Cat in practice to a unit who can hold off decently well even the strongest Red enemy. Speed helps this unit out a lot too, as it allows meatshields to be generally more effective and to clog less the enemy limit.

Since its base stats are really low, Defense Buff and Attack Buff won't improve this cat much and Target Black is only useful with Dodge Attack. Since Black enemies deal immense overall damage, it's safe to assume that Flying Ninja Cat will die from only one hit when the dodge ability doesn't trigger.

*First stats are 1st form's initial, second and third stats include 300% Empire of Cats Treasures; recharge time may vary.
*Time between attacks is the time from the attack's execution to the start of the next attack (includes backswing).
*For units with multi-hit attacks, attack animation is the part of the animation leading up to the first hit.
*Fruit Treasures not included.
*See this section to calculate Ninja Cat's stats. 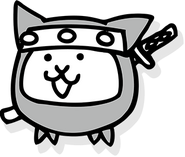 Ninja Cat in HD
Add a photo to this gallery

Retrieved from "https://battle-cats.fandom.com/wiki/Ninja_Cat_(Special_Cat)?oldid=521633"
Community content is available under CC-BY-SA unless otherwise noted.