This article is about the Cat Unit. For the enemy, see Nono (Enemy).

Nono is a Rare Cat that can be unlocked by playing the Rare Cat Capsule during the Merc Storia Collaboration Event.

Evolves into Nono CC at level 10.

Nono is used as a specialized meatshield against Black enemies. While this may seem counter-intuitive due to their generally high DPS, Nono is able to last longer than practically all other meatshields against them because of her Resist ability. Due to her above-average recharge rate, she is essentially the anti-black equivalent of Artist Cat.

Note that she has a slightly longer range than most meatshields, allowing her to form a secondary line of defense to slow down the pushing power of black enemies. Her range is still below Bombercat's range (240), however, so the two can work together still. This is important in stages like Merciless XP so Razorback won't randomly break through your defenses.

Unfortunately, her base health is quite lacking, so she struggles in stages that mix Black enemies with any other trait. This weakness is most prominent in stages such as Gestalt, Decay or At Least I'm a Cat. Her cost of 315¢ is quite high as well, meaning that she will end up as a waste of money if she can't make full use of her ability.

*First stats are 1st form's initial, second and third stats include 300% Empire of Cats Treasures; recharge time may vary.
*Attack frequency is the time between an attack is delivered and the next.
*For units with multi-hit attacks, attack animation is the part of the animation leading up to the first hit.
*Fruit Treasures not included.
*See this section to calculate Nono's stats. 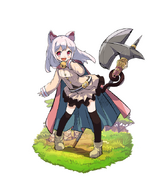 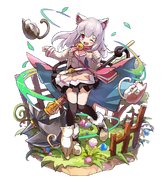