This article is about the enemy. For the Cat Unit, see Doll Cats (Rare Cat).

This enemy, unlike other Awakened enemies, has quite low health compared to them. However, it has a fast attack that deals a decent amount of damage and creates a level 1 Wave Attack, meaning that Bahamut Cat and similar units will get hit by it.

Take into consideration its Floating attribute and use units like Doctor Cat, Necromancer/Necro-Dancer Cat and Sanzo Cat. Octopus Cat is also very effective against this unit, due to it being both floating and having the ability to block Wave Attacks. 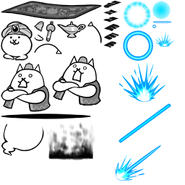