This article is about the enemy, for the Cat Unit, see Nyamusu (Special Cat).

An enemy with rather high health, average damage and range as well as a high chance to freeze the players Cat Units. This enemy also has Area Attack making its freeze more deadly than it should be.
In its debut stage she is at a very low magnification of 1%, making its initial stats pitifully lower than what they are in its second debut.

Units that outrange this cat can help very much, as well as units that are Cats with Freeze Immunity so that 75% proc chance will do absolutely nothing to them. However it's 8,000 will chip away your units health little by little no matter how high level they are. 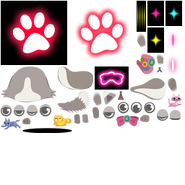