Owlbrow is similar to Mooth but with a much lower money drop, and hits much heavier in exchange for reduced attack rate and movement speed. His long backswing allows him to hide behind enemies that have a higher range than him, such as Li'l Eraser Cat in Tiny Will, because units tend to walk back into his range during his backswing, causing him to stay in place during the next attack.

The main feature of Owlbrow is the ability to obliterate close-mid-ranged attackers like Hip Hop Cat, Swimmer Cat, Mer-Cat and many crowd controllers like Bishop Cat, because they get outranged. Of course, this is not always the case provided your levels.

Still, stalling him is pretty easy, and this allows attackers that outrange him to safely attack. The most effective is hands down Salon Cat, since this enemy is often encountered in groups and protected by peons, but (Crazed) Lizard Cat or Cataur could also be used to pick them off one by one. Another option is to snipe them using Wave or Long Distance attackers like Crazed Gross Cat or Vaulter Cat.

A larger variant introduced in All Hallows Road. Can knockback Cat Units and has more health, damage and range, but moves slower and has an additional knockback.

A Magician Owlbrow appears as a Super Rare League 2 trap in The Burgle Cats. 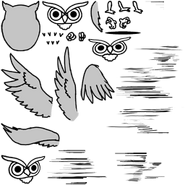