"Who wants a Rare Ticket?!

If this page tops 50,000 "Likes" by the end of Oct. 31, all users score a Rare Ticket they can use to get a random powerful Cat! Tell a friend, and everyone wins!

(This reward will be delivered by the app from Nov. 1st. One Ticket per user.)" 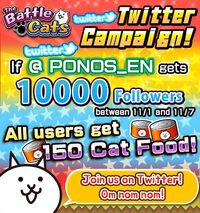 "Happy Halloween from all of us at PONOS!

We're going against our tricksy nature to give you all another treat! We're offering 150 free Cat Food to ALL users if our Twitter page @PONOS_EN gets 10,000 Followers by the end of November 8th! This is an easy one! Good luck!"

"We’ve delivered a lot of weird cats to you guys over the last few months, and rest assured that we have a few more surprises in store for 2015!

We want to know: What Cat do you dream of seeing under your tree on the 25th? Draw, design, or snap your idea and send it in to us for a chance to win!

We will select dozens of lucky artists between 12/13 and 12/24 to get great prizes after Christmas, and we will repost the best fan art (with artist credit) on our Facebook and Twitter pages.

"Christmas has come and gone, but the New Year still awaits - and the Battle Cats are ready to invade 2015 in style!

Join us on The Battle Cats in our countdown to a brand new solar orbit with ✧✧30 free Cat Food✧✧ the first time you log in each day. And just to make sure the New Year begins right for all our loyal players, we'll keep the presents coming until 1/4/2015!"

Rules and Event Information (from PONOS page on Facebook):

"Vote for your favorite Cat in each bracket: 1. Click on one of the two Cat pictures posted by PONOS. 2. "Share" that Cat picture to vote for it!

24 hours after each post, we'll count up the Share total and the Cat with the most votes will move on to the next round! Who will be the Champion of the Cats?!

Best of all, TEN voters will be selected from EACH bracket to win 150 Cat Food each!

"Know someone who'd love The Battle Cats? For a limited time, we're giving away a pack of goodies for newcomers to the Nyanko experience! Clearing the tutorial stages will get you Rare Tickets, Cat Food, XP and more to start you on your way!"

"It's the fourth of June, and we all know what that means: a very merry Hug Your Cat Day to one and all! (It really is!) Celebrate the Internet's favorite holiday by showing us your love for the favorite feline in your real life! Post a pic of you and your cat to our offical Twitter page @PONOS_EN with the hashtag ‪#‎HugYourBattleCat‬

We'll choose 30 users to win 330 Cat Food each to kick off an amazing summer with The Battle Cats!

BUT WAIT, THERE'S MORE! We'll send FIVE lucky grand prize winners an official Battle Cats plushie of either Basic Cat or Tank Cat on top of the Cat Food! What about those of you live in a middle of a wasteland with NO actual, live cats to brighten your days? Just draw the cat of your dreams, take a photo with it, and we'll count it as good enough to enter - and maybe win a Battle Cat of your very own! (Game screenshots DON'T count, though!)

Entries with the hashtag #HugYourBattleCat will be accepted at @PONOS_EN on Twitter until Sunday at 11:59PM (June 7th, 2015) PST

(completed) To commemorate the second collaboration event between Battle Cats and Merc Storia, a Twitter campaign is held in both title. During campaign period, player follow the official Twitter page of Nyanko Daisensou and Merc Storia, and retweets the hash tag of provision (#にゃんこ_メルスト_コラボRTCP), all user will receive luxury gifts in the game depend on the total number of retweets on both account.

We're gearing up for the BIG update later this month! Take on these challenges to prepare, and stay tuned to this page as we release more information!

Ready yourself for the new stages - clear the early chapters and have them already unlocked when they appear! As a bonus reward, all users who clear Chapter 1: "The Battle Cats Rising" will receive a bonus Rare Ticket! (Already played through the first chapter? You'll automatically pick up a free ticket just by logging in!)

Get supplied! Log into The Battle Cats each day during the event to receive a different bonus item! Cat Food, Speed Ups, XP, and more!!!

Recruit your allies with different Awakening Stages each day! Here's your chance to unlock the uber-powerful True Form of the Special Cats before the update appears - you'll need all the help you can get!!

Until 9/1, rookie Battle Cats users can enjoy a wide selection of fabulous gifts for clearing the tutorial stages of The Battle Cats! Finish Japan, and you'll get items, XP, and some sweet sweet Cat Food! Only new users are eligible for the campaign gifts this time around, old players will be given a Rare Cat Ticket between August 12th and August 31st.

The future awaits - are you Cat enough to face off against the challenge of an alien Earth? ٩(ↀДↀ)۶

We're upping the stakes with awesome bonus rewards for the brave warriors who dare try to conquer the 30th century!!!

The moon is full, the air is chill - Halloween is almost here!

In celebration, PONOS invites you to the Scaredy Cat Masquerade!

Anyone can enter this contest us by posting your original design for a Battle Cat as a comment on this post. Spooky, creepy, funny or cute, it's your choice!

Our artists will choose our favorite designs to win a Cat Food reward and announce the lucky winners on Halloween!

Get drawing, sketching and designing, because this party will be over before you know it!

BONUS CHALLENGE: If this post collects enough LIKES, you might just find a special gift waiting for you on Halloween...

The celebrate the collaboration event between Battle Cats and YuruDora, a Twitter Campaign is held.

During this campaign's period, follow PONOS' official Twitter page and retweet the tweets with the hashtag: (#にゃんこ_ゆるドラ_コラボRT) of provision.

When the campaign end, players will get luxury items depend on the number of retweets:

"We know you all have been counting the days until everyone's favorite yearly tradition, Hug Your Cat Day!

Show us your love for your favorite real life feline! Post a pic of you and your cat to your wall with the hashtags ‪#‎HugYourBattleCat‬ and ‪#‎BattleCats‬ (See example in the comments below!), and make sure to set the share settings to Public so we can find your entry!

We'll choose 20 users to win 150 Cat Food each to kick off an amazing summer with The Battle Cats!

What about those of you live in a middle of a barren, Cat-free wasteland? Just draw us the cat of your dreams and we'll count it as good enough to enter - and maybe win a Battle Cat of your very own!

Entries with the hashtag #HugYourBattleCat will be accepted until June 7th at 11:59PM Japan Time. Now: Hug, share, enter, and WIN!"

Help us get 111,111 follows of the official PONOS pages to unlock yet another mystery Cat, only available in Japan before now!

We're nearing 100,000 Likes/Follows between Facebook and Instagram! Let's push it a bit further and unlock an new limited edition friend for your Cat Army!

If our pages reach 111,111 Facebook Likes and Instagram Followers in the next 30 days, a special stage with a Rare Cat reward will be available for all Battle Cats players!

(Completed) "One of our most favoritest YouTubers, the one and only MattShea, is teaming up with The Battle Cats on a special campaign to reveal a new limited edition Cat!

Once this video reaches 400,000 views, a mystery Cat never before released outside Japan will be unlocked for all Battle Cats players sometime in the near future!" 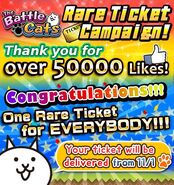 Retrieved from "https://battle-cats.fandom.com/wiki/PONOS_Campaigns?oldid=285668"
Community content is available under CC-BY-SA unless otherwise noted.