Pai-Pai is an Uber Rare Cat that can be unlocked by playing the Rare Cat Capsule during the Red Busters event. True Form added in the Version 10.0 Update improves her attack rate and resistance against Red enemies.

Evolves into Pai-Pai Z at level 10.

Evolves into Pai-Pai DX at level 30 using Catfruit and XP.

Pai-Pai is considered a very powerful Uber, as she is one of the best units in the game against Red Enemies, asserting absolute dominance by taking only 1/4~1/5 damage and dealing 3~4x damage against said trait, depending on the Blood Fruit Treasure you have. Otherwise, you can combine her with a tank like Roe Cat or Cat Machine Mk 3 to dominate Red enemies.

Pai-Pai can almost guarantee victory in Realm of Carnage and Wrath of Carnage, as she can deal immense damage to Hannya while simultaneously ignoring Hannya's Weaken effect. She can also effortlessly deal with the waves of Bores, but not without a proper strategy to deal with R.Osts.

Pai-Pai is a unit worth your trouble. Any stage with only red enemies can be obliterated in a matter of minutes. This is also helped by a quick recharge, but it’s worth noting she has quite the long attack rate and, therefore, average DPS outside of red enemies. She can always fall on her high health, but defending her is necessary.

Pai-Pai DX gains a quicker attack rate and Insane Resistance instead of a regular resistance, thus boosting her both offensively and defensively. This is all there is, a straight power upgrade, but a welcome one, as the stat boost is quite significant.

Pai-Pai DX, thanks to the shorter time between attacks, also becomes a better generalist, although she is still far from specialized generalists.

Since she is a unit who relies highly on both attacks and defence, upgrading these core abilities is never a bad idea, though focusing on boosting her with Catseyes first is recommended. Similar story for survive.

Slow immunity, although it makes her counter Professor A. better, has little use outside of that; also, Pai-Pai can already tank hits and reach this enemy reliably, so it's not really a necessity. This ability is only recommended if one still needs a generalist for stages with enemies that rely on slowing, if there is a lack of better alternatives.

The slow ability, lastly, has high NP cost for short uptime, making it overall not worth it, especially because not many enemies can survive a hit from Pai-Pai in the first place.

*First stats are 1st form's initial, second and third stats include 300% Empire of Cats Treasures; recharge time may vary.
*Time between attacks is the time from the attack's execution to the start of the next attack (includes backswing).
*For units with multi-hit attacks, attack animation is the part of the animation leading up to the first hit.
*Fruit Treasures not included.
*See this section to calculate Pai-Pai's stats. 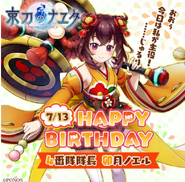 A character from Kyoto Project similar to Pai-Pai DX