The official name of this enemy is currently unknown.

The Penlight Guys are a Traitless enemy that appear in Event Stages.

They are a small crowd of 3 stick figures with penlights and neon colored bandanas. Each one has a unique color: purple for the front one, green for the middle one, and light blue for the last one. They are extremely weak, with only 1 health and 1 attack power.

Much like Firework Guys 1 and 2, this enemy serves as a decoration, due to them being helpful for neither the enemy side (in terms of stats) nor the player's side (they don't help the player with money). They are typically spammed at a moderate rate in the stages that they appear in, but higher-than-usual enemy limits prevent them from clogging the enemy spawn system. 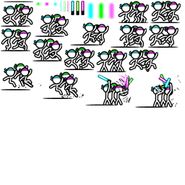