SoL: Sub-chapter 21 - Safe and Not Sorry

Pigeon de Sable has a mild attack rate and will always make a Lv.1 Wave Attack. Much like R.Ost, his range is enough for him to hide behind other peons while still blocking hits for the boss. Do not underestimate Pigeon de Sables, because groups of them can shred your units and easily break through even the toughest of meatshields. A Lv.1 Wave Attack might not sound like much, but it covers a range of exactly 467.5, being able to hit all units under that range.

Octopus Cat is a ridiculously good counter against Pigeon de Sable, since it is resistant to Floating enemies, can weaken them and blocks Wave Attacks, which are this enemy's strongest point. Even without his Immune to Waves Talent, Dancer Cat is a great counter to Pigeon de Sables in many stages, being able to take out groups of them in a single strike. Miyamoku Musashi is similarly effective, but make sure to support him with other attackers.

In Nyanko Defense Force, Pigeon de Sable makes a cameo appearance as a stone carving in one of the backgrounds.

Pigeon de Sable makes a cameo in Go! Go! Pogo Cat!, along with Brollow and Ecto Doge. Unlike the other two, seeing Pigeon de Sable has no requirement, as he can be seen flying in the background when the game begins.

Pigeon de Sable appears as a League 7 trap in The Burgle Cats. 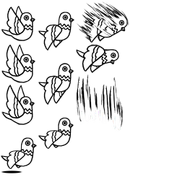