This article is about the enemy. For the Cat Unit, see Pokota (Rare Cat).

Pokota is a backliner who interestingly has a multi-hit attack. At his highest strength (Rainbow Blast! at 3 crown difficulty), he sports 128,000 health and does 10,000 damage with each part of his multi-hit attack. In the field, he's a bruiser to Cat Units who aren't able to outrange him and, despite being a backliner, he attacks more frequently than his allies (Ovis or Coco).

As Pokota's damage output is fairly high, it's important to bring meatshields so that he doesn't piledrive the more important units on your team. Mohawk Cat, Eraser Cat, Crazed Macho Cat and Crazed Wall Cat should be sufficient for the combination of Pokotas, Ovis, and Cocos that are present in Rainbow Blast!. 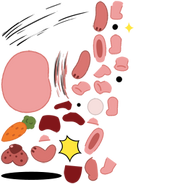