Possessed Empress (操られしネコ女王, Ayatsura Reshi Neko Joō, "Possessed Cat Queen") is Empress Cat, possessed by an Aku as a product of her research. She appears in the Advent Stage Temptation's Symphony.

Her Shield has 1,200,000 health and fully regenerates for each of her 10 knockbacks, so her effective health is 12,980,000 without Shield Piercing Cats. And with her high damage, extreme range, Mini-Waves and guaranteed 4-second slow, getting them to hit her is easier said than done. 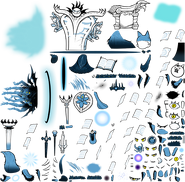