Compared to other Cyclones, Primeval Cyclone moves very fast, with a movement speed of 18. However, it has a relatively low damage output (7,777), which allows it to be stopped via weaken. This applies before the activation of its strengthen ability, which triples its damage to 23,331 per hit.

Prof. Cat Jobs, Awakened Bahamut Cat and "Weaken" Effect UP Combos (ex. Power of Darkness, Cat High) is another way to defeat it. If you decide to use Prof. Cat Jobs, it is important you DO NOT bring Thaumaturge Cat, Talented Slapstick Cats, Awakened Mina or any other cat that can weaken Relic enemies, as their effects will cancel out Prof. Cat Jobs's superior weaken ability. 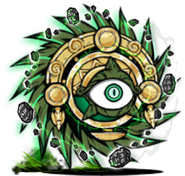