Primordial Cat (古代ネコ, Kodai Neko, Ancient Cat) is a Rare Cat that can be unlocked when beating the stage Charybdis' Mouth. True Form has a longer attack animation, but gains the insanely tough ability against Metal and Relic enemies.

Evolves into Modern Cat at level 10.

Evolves into Future Cat when obtained from Typhoon Nihil (guaranteed to drop) and is level 20 or above.

Primordial Cat serves as a meatshield against Relic and Metal enemies. Less effective on stages that mix them with other enemies as well as M. Ost due to its knockback and slow abilities.

Future Cat gains Insanely Tough against Metal and Relic enemies and a faster attack rate. The slower attack animation is negligible as this cat is a meatshield and has very bad attack power. The improved resistance is what you get this true form for, improving Primordial/Modern Cat's health at level 30 going from 44,200 against Metal and Relics, to a whopping 66,300 health vs. Metal and Relics. Unfortunately, everything else stays the same.

*First stats are 1st form's initial, second and third stats include 300% Empire of Cats Treasures; recharge time may vary.
*Time between attacks is the time from the attack's execution to the start of the next attack (includes backswing).
*For units with multi-hit attacks, attack animation is the part of the animation leading up to the first hit.
*Fruit Treasures not included.
*See this section to calculate Primordial Cat's stats. 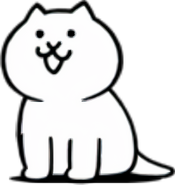 HD Modern Cat
Add a photo to this gallery

Retrieved from "https://battle-cats.fandom.com/wiki/Primordial_Cat_(Rare_Cat)?oldid=515184"
Community content is available under CC-BY-SA unless otherwise noted.