Professor A. (教授 Kyōju, Professor) is a Red variant of Master A. that appears in Legend Stages.

Professor A. has even higher DPS and range than Master A. along with a chance to slow units on hit.

Professor A.'s biggest weakness is units that outrange him, especially Long Distance Cats. Dark Emperor Catdam and Prisoner Cat are great no gacha ways to get rid of him. If Professor A. has support, try and bring him down first as it's far easier to kill an unprotected Professor A. than one with endless waves of tough enemies to fight for him, unless of course you use them as "stepping stones" for Long Distance/Wave/Surge Attackers. Awakened Bahamut Cat may also get a hit on Professor A if you get lucky with timing.

Fried Shrimp Cat and Talented Ultimate Bondage Cat can be used as another strategy. With high health vs. Reds and weaken/freeze respectively, they are both able to perfectly stall Professor A if unprotected 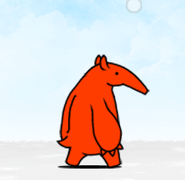