A collaboration event between Nyanko Daisensou and the popular anime Puella Magi Madoka Magica (魔法少女まどか☆マギカ Mahō Shōjo Madoka Magika, Magical Girl Madoka Magica) was held from October 17th, 2016 to October 31st, 2016. The event returned to Nyanko Daisensou on September 20th, 2018 to October 4th, 2018, and was released for The Battle Cats on May 27th, 2019 to June 10th, 2019. The collaboration includes daily stamps, an exclusive Gacha, exclusive stages, and other promotions going on even after the collab period.

Characters that appeared in the movie Puella Magi Madoka Magica the Movie Part III: Rebellion are available to unlock in the Battle Cats via the Rare Cat Capsule/Gacha during the event period. This Gacha consists of:

Collaboration Stages are available to play in the Legend Stages menu from the title screen. These stages are colored in purple, which include characters from Madoka Magica as enemies. The first stage to become available is called Puella Magi Madoka Magica, which has the Rare Cat "Li'l Madoka" as a Treasure. As the player progresses to more difficult levels, there is a better chance to unlock this unit. Using a Treasure Radar when clearing any level will drop this character in one-shot. Clear all the levels to receive 30 Cat Food.

From the 3rd day of the event onwards, the awakening stage "Walpurgisnacht" appears, with a guaranteed chance to unlock Li'l Madoka's True Form, Li'l Ultimate Madoka.

From the 7th day of the event onwards, the awakening stage "A Fake Mitakihara" appears, with a chance to unlock Li'l Homura's True Form, Devil Homura.

There are three blitz stages available everyday during the event period, which all share the name Witch's Labyrinth. Each map has levels named after the Witch found within them: The Rose Garden Witch for Gertrud, The Dessert Witch for Charlotte, and The Box Witch for Kirsten. The difficulty is increased after each level, each level also has a chance to drop Kyubey Cat upon completion. The player will receive 30 Cat Food after clearing all levels of a Witch's Labyrinth Stage.

They appear during these time frames:

Missions based around the collab stages are available after 1 day of the collab.

* The player can't achieve the rewards if they clear the missions before their start date.
* The player needs to tap the button next to each completed mission to claim the rewards.

During the collaboration period, players were asked to vote which of the two cats is their favourite, Madoka Cat or Homura Cat, it lasted two days and the results were in, Homura Cat had outvoted Madoka Cat, soon after mobile wallpapers were unlocked of Homura Cat and Madoka Cat.

When the Twitter Campaign's post count reaches 30000, the limited EX character "Chibi Homura" (ちびほむら) will be unlocked in the game (as a login bonus).

Facebook Campaign is held from October 11th to October 21st, 2016. By voting for the best Magical (Cat) Girl, the character has the most votes will have a collaboration wallpaper in Battle Cats-style presented to all players (if the poll has at least 3000 votes)

When the number of right answers and shares reach 3000 or more, some "keywords" will be revealed. The player can send that "keyword" to @nyanko for a collaboration wallpaper.

An exclusive gacha/jackpot consisting of characters from Madoka Magica with extremely high rarity will be available during the event period.

魔女が支配する世界に挑め！ (Have a look of a world dominated by witches!)

Characters from Madoka Magica will appear as enemies. Collaboration Stages can be accessed from the "Battle Start" button in the "Stories of Legend" menu.

During the event period, login to the game for the first time everyday will reward the player a variety of items such as Battle Items and Cat Food.

*Distribution period of Chibi Homura is from October 24th to October 31st, 2016.
*To receive all benefits from the collabo, the player needs to update Battle Cats app to the latest version.
This character can also be unlocked as a treasure in "Madoka ☆ Magica Normal Stages".

Before the collaboration, a SNS campaign was held, all players were rewarded Li'l Homura and other item gifts. 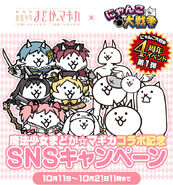 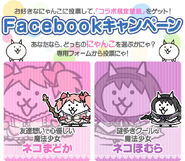 Line Campaign
Add a photo to this gallery

Retrieved from "https://battle-cats.fandom.com/wiki/Puella_Magi_Madoka_Magica_Collaboration_Event?oldid=394291"
Community content is available under CC-BY-SA unless otherwise noted.