Queen Mother V (太古の蜜江 Taiko no Mikoe, "Mikoe the Ancient") is a Relic/Floating variant of Queen B that appears in the Advent Stage The Old Queen.

The Relic variant of Queen B has very similar characteristics to her predecessor: Extremely high range and Long Distance attacks that inflict a status effect. While Curse may seem less threatening than Slow, Queen Mother V is capable of cursing units for a whopping 111 seconds, crippling the defenses of Anti-Red tankers against the One Horns and Professor As that appear in her debut stage. 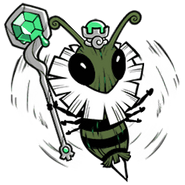