Queen Reika is an Uber Rare Cat from the Girls & Monsters: Angels of Terror set, which was added in update 6.0. She can be unlocked via the Rare Cat Capsule when said event is held. Reika is one of the first characters to attack more than one time during their attack animation. True Form added in update 9.0 increases knockbacks and reduces time between attacks significantly.

Evolves into Pharoah Reika at level 10.

Reika can be used to defeat Alien and Zombie enemies with ease since she does massive damage against them and has Zombie Killer. She can OHKO many Zombie units and even get rid of those that revive an unlimited number of times (like Zamelle). Her quick attack animation even allows her to hit Zombies before they burrow, though this can be quite difficult to pull off. She even is able to succeed against Li’l Zyclone, and Dread Bore, two of the most dangerous Zombie enemies in the game. Against Cadaver Bear, she works well, but due to Cadaver's attack rate, it is highly recommended you use highly levelled meatshields or tankers like Green Shell Cat and Shigong Cat to stall him, else she will not be able to consistently hit him.

Reika can be used in tandem with other anti-Aliens/anti-Zombies to make even easier work of them, although you should focus on using Cats that support her; instead of secondary attackers, as Reika is already prone to miss. Cats that debuff (ex. crowd-controllers like Thaumaturge Cat) are the most ideal for this.

Her multi-hit can partially damage incoming enemies via the second hit. However, enemies can also "dodge" the second hit if they are knocked back. An advantage of this is that it can work for crowd-control, so freezing the Alien before she starts to land the second hit is a guaranteed way of letting her do damage.

Her True Form doesn’t add much to the previous forms as it only adds 2 more knock backs, but this can increase her survivability by a whole lot against powerful pushing enemies such as Dread Bore/Nimoy Bore, therefore making her landing more hits.

*First stats are 1st form's initial, second and third stats include 300% Empire of Cats Treasures; recharge time may vary.
*Time between attacks is the time from the attack's execution to the start of the next attack (includes backswing).
*For units with multi-hit attacks, attack animation is the part of the animation leading up to the first hit.
*Fruit Treasures not included.
*See this section to calculate Queen Reika's stats. 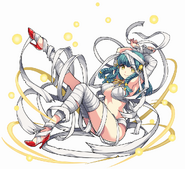