R.Ost is among the most well-equipped pushers in the game. He has fast movement speed, high health, enough range to hide behind most peons, and a rapid Area Attack that will shred your cats. The icing on the cake is that he can do Critical Hits, which make fighting him much more inconsistent. Fortunately, he has five knockbacks to reduce his heavy pushing power.

Long-ranged attackers such as Crazed Bahamut Cat, (Crazed) Dragon Cat, Paris Cat and/or Drama Cats will do fine against R.Ost in earlier stages. However, in much later encounters, you may need the use of more crowd-control against R.Ost. Tourist Cat and/or Glass Cat can be good at this, as long as using crowd-control is not exploitable by the other enemies in the stage. Another, less applicable strategy for R.Ost is to use Awakened Bahamut Cat. When used correctly, he can chip off an R.Ost by being timed to strike during R.Ost's backswing animation (the second peck), then let the R.Ost be finished by the rest of your attackers if Awakened Bahamut Cat did not kill said R.Ost. For this to work, Awakened Bahamut Cat must be spawned while R.Ost is frozen or during R.Ost's backswing and there can't be any other enemies in front of R.Ost. Freeze effects, such as the Thunderbolt Cannon and Tourist Cat, can make this easier to time.

Any unit exclusive to the EPICFEST event will do very well against this avian atrocity. The weaken effect helps a lot too, so don't be afraid to save an extra slot for Thaumaturge Cat. Overall, this enemy is easy to counter on his own but can be a real pain when spawned in groups (e.g. in The Bathroom, Procrastinator Parade, and Caliban's Keeper) or with enemies that take advantage of his many knockbacks, such as Hannya in River Styx. 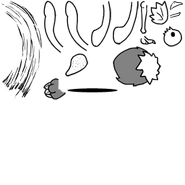