Rain D. (ナカイくん Nakai-kun) is a Traitless enemy that appears in The Aku Realms and Legend Stages.

Rain D. is a large, fast-moving enemy with moderately high health. At 100% strength magnification, his headbutt attacks deal about 5,000 damage each. Rain D. also notoriously has an extremely high knockback count and deceptively long range along with a fast attack rate, making him quite the threat when guarded by and supporting enemies with few to no knockbacks.

Although intimidating when buffed, this enemy becomes somewhat easier to deal with later on in the game, due to an abundance of Long Distance/Wave Attack units such as Cyberpunk Cat, Vaulter Cat and Crazed Gross Cat.

To stall Rain D, use a few units that deal enough damage to knock him back while outranging him, such as Paris Cat, Sexy Legs Cat, or Dragon Cat, so that he doesn't quickly shred your defenses before you store up enough cash to deploy heavier hitters such as True Valkyrie Cat or Ururun Cat. Sending the cheapest meatshields (75¢) on different intervals can help to effectively stall Rain D. while accumulating cash.

His knockback count can be annoying or helpful in the right situation. If constant damge is dealt to him, he can be kept in a knockback cycle until he's defeated. A good example of units that can do this are Surge Attackers, such as Ritual Saint Kasli and Kasli the Bane. 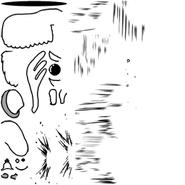