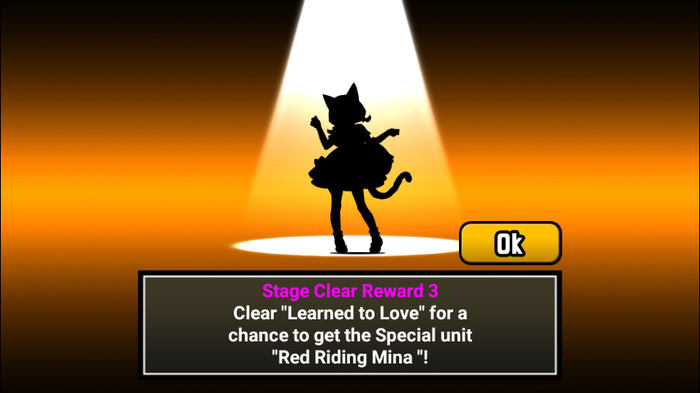 This article is about the Cat Unit. For the enemy, see Codename "Red Riding".

Red Riding Mina is a Special Cat that can be unlocked when beating Learned to Love. True Form added in Version 7.0 increases health, attack power and reach, is immune to Curse and can weaken Relics.

Evolves into Crimson Mina at level 10.

Red Riding Mina is a very useful long-range attacker, one of the few non-gacha units that can snipe enemies such as Calamary, Professor A. and Rain D. from behind the frontlines. Unfortunately her health and attack power in her Normal/Evolved Form pales in comparison to similar Uber/Legend Rares, which means that you will mostly only use her in Restriction Stages, unless you happen to encounter a stage where you are able to stack Minas at the beginning; most specifically, you will stack her behind your own Cat Base, usually with the support of Crowd-Controller-class Cats like Onmyoji Cat or Prof. Cat Jobs. Furthermore, should you be using those crowd-controllers, it is recommended to use "Weaken" Effect UP Cat Combos like Power of Darkness or Cat High in order to ensure Mina's safety.

Awakened Mina gains a higher effective range, higher base stats, and on top of that, the ability to weaken Relics, albeit with a 50% chance. As specifically anti-Relic abilities are uncommon outside of Talents, the niche in and of itself is important, as it allows her to counter dangerous enemies like Othom and M. Ost. So, whenever she does weaken, it can change the tide of the battle, as it helps Primordial Cat and your other meatshields survive for longer. With this new addition, stacking her is even more important as it increases her chances to weaken to almost guaranteed! However, if you have Slapstick Cats' Talents, you'll likely rely on them for weaken instead of Mina.

Weaken aside, unlocking this form doubles her DPS and increases her piercing range to 265. Overall, she is a worthy use of your Elder Catfruit, and is useful and relevant in numerous late-game stages. With all this being said, do not let any enemies enter her blind spot unless you are trying to stack her, as most opponents encountered this late deal extremely high damage even on 1-Crown difficulty, and Mina has no abundance of health to safely tank any dangerous hits.

*First stats are 1st form's initial, second and third stats include 300% Empire of Cats Treasures; recharge time may vary.
*Time between attacks is the time from the attack's execution to the start of the next attack (includes backswing).
*For units with multi-hit attacks, attack animation is the part of the animation leading up to the first hit.
*Fruit Treasures not included.
*See this section to calculate Red Riding Mina's stats.