Sakura Sonic is an Uber Rare Cat that can be unlocked by playing the Rare Cat Capsule during the Metal Busters event. True Form added in Version 10.1 improves resistance against Metal Enemies.

Evolves into Afterschool Sakura at level 10.

As the Metal Buster, her true usage is not directly destroying them, as she has very low Critical chance (5%). She instead has 3 anti-Metal abilities: Slowing Metals down, weakening them by 50% with 100% chance, and only takes 1/5 damage from Metal attacks, making Sakura the ultimate anti-Metal debuffer. This allows her to easily controlling Metal Enemies while better critters finish them off. Sakura also has fantastic synergy with long ranged Critters, such as Hayabusa, Paladin Cat and E. Kubilan Pasalan.

Her True Form may look underwhelming, only improving her resistance to take 1/7 damage from Metals, but by putting her in the first row, she will activate a Cat Combo called Ninjutsu Cute that increases Critical chance by 1%, which is useful for spammable Critters like Catasaurus and Catornado. When combined with Miracle Performance and Whale Digger, the effectiveness of critters is increased even more while conserving slots. For example, using the triple-critical chance up combos with Talented Cameraman Cat will give her a 6% chance to perform a Critical Hit.

*First stats are 1st form's initial, second and third stats include 300% Empire of Cats Treasures; recharge time may vary.
*Time between attacks is the time from the attack's execution to the start of the next attack (includes backswing).
*For units with multi-hit attacks, attack animation is the part of the animation leading up to the first hit.
*Fruit Treasures not included.
*See this section to calculate Sakura Sonic's stats.

Before Kyoto Project was removed, Sakura Sonic appeared in it as obtainable collaboration unit. 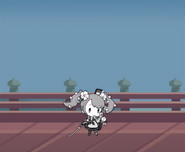