Selena (ナミエちゃん Namie-chan) is a Black enemy introduced in Never Not Summer!.

Compared to Sunny Celeboodle, Selena has much higher health and deals damage per hit, with no delay between attacks, but has one additional knockback and significantly shorter range. She also a 100% chance of knocking back cats and a 40% chance of slowing them.

For the most part, the same strategy that works against Sunny Celeboodle also works against Selena: meatshield non-stop while slowly whittling down her health with long-ranged attackers, including Bahamut Cat and other heavy hitters. Avoid using short-ranged units like Titans against Selena, as they will most likely be killed or knocked back repeatedly before they have a chance to attack. Also, if you time Bombercat correctly, she will be unable to move. 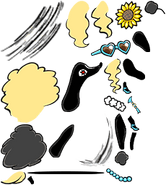