Shin Godzilla is a Traitless enemy that appears in the Godzilla Collaboration Event.

Shin Godzilla is a unique enemy, having very low stats at 100% strength magnification, however, most of the stages in the Godzilla Collaboration Event buff Shin Godzilla to such an extreme point that he can obliterate your base in only a few hits, which is supported by his Base Destroyer ability. Along with this, Shin Godzilla also has an insane Long Distance reach and immunities to many effects, making it near impossible to interrupt its attack. Luckily, Shin Godzilla also has Multi-Hit which can even save you in some stages if you are lucky enough to knock it back before your base is destroyed. Shin Godzilla is also comparable to Ramiel in many ways and although he may look black, he is actually a traitless enemy.

Due to its abnormally big blindspot, it is recommended to rush him down as fast as possible with fast units like Bullet Train Cat and Awakened Bahamut Cat before Shin Godzilla approaches your base. A good thing to note is that if he detects a cat in his standing range, then he will immediately start to attack, making it so if you manage to get a unit into its blindspot, it won't be able to move forward until it's dead. Don't rely on this tactic though, as for some stages, it can destroy your base even from its own base. This means that killing it in 1-2 hits is necessary. 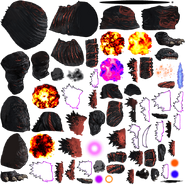