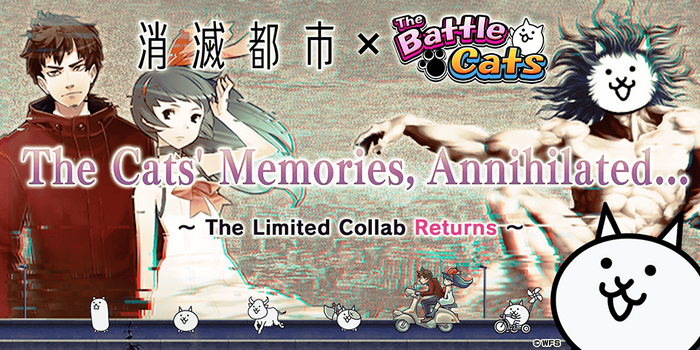 Characters from Annihilation City are available to unlock in the Battle Cats via the Rare Cat Capsule during the event period. These Gachas consists of:

The exclusive Gacha for this collab is on during this period. To spin it, the player need to switch to this Gacha on the top-left of the screen. This time, in addition to Mystery Girl Yuki and Crazed Yuki, an Uber Rare palette swap of her was created, named Lost World Yuki.

*This Gacha also discharges other Cats (those common Rares and Super Rares).
*Yukis won't appear in other Gacha, but they are also not guaranteed to drop.
*The player needs to update the game to version 6.1 in order for this Gacha to appear.

Collaboration Stages can be accessed in the Stories of Legend menu, where it stores all sort of event stages. This collab has 3 "Chapters", when the collab start, only one "Chapter" can be seen, the second and the third one will be added after two days, one after another, and they are all Timed Stages. There is a chance to get the Rare Cat(s) (?) Takuya & Yuki upon clearing these levels, the chance is higher in more difficult level, but using a Treasure Radar in one of these levels to get them instantly.

If the player want to get the third form of Takuya and Yuki for their collection, their Awakened Stage is available 3 days after "Chapter 3".

*They need to be at level 20 or higher to evolve. Done in the Upgrade menu

A new collaboration stage is introduced, which is available to play the same time as the Awakened Stage above. This new stage has a new Rare drop named "Redhaired Yuki Cat" (赤髪のゆきにゃん). The deal to get this Cat is the same as Takuya and Yuki.

*The player must update the game to version 6.1 to get all the benefits.
*Those who already unlocked Yuki Cat, can't unlock it a second time.

*The benefits above can be received by tapping the red button on each stage.

Log in everyday to get 20 Cat Food for the duration of this collaboration event.

Collaboration Gacha "Shoumetsu Toshi" appears during this event period. By playing this Event Gacha, the player has a chance to get Mystey Girl Yuki (謎の少女ユキ) and a new Uber Rare Cat Crazed Yuki (狂乱のユキ).

In addition, a new chapter was added: Takuya & Yuki Awaken Stages, introducing Takuya & Yuki's True Form: "Takuya and Beauty Yuki" (require level 20 or above to evolve). This chapter will release in May 27th, 2016.

Completing the Collaboration Quest during event period will reward the player:

To celebrate the second collab, 20 Cat Food will be sent to each player.

Shoumetsu Toshi Gacha can be accessed by using the Gacha Switch button, playing this Gacha may unlock the Uber Rare Cat: "Mystery Girl Yuki", player can also unlock Gold Cat, Neneko, Cat Base Mini and many other cats.

First Gacha Discount Event is also excluded during the event.

(If the levels does not appear, player needs to update Battle Cats to the latest version - ver3.6.0)

​Time-limited stages appears, with the Timed Score feature. It's possible to win a scoring reward that has been set in each stage.

Rewards can be seen in Stage Select screen, from the "scoring reward" (採点報酬) button at the bottom left.

The rare character: Takuya & Yuki appears as an item drop with extremely rare probability. The more difficult stage cleared, more chance to get this character, in one shot if player uses Treasure Radar.

In addition, benefits can be used in Shoumetsu Toshi as clearing collaboration stages in Battle Cats:

There is also a collaboration event in "Shoumetsu Toshi" app

Story Quest of Shoumetsu Toshi during event period, benefits can be used in Battle Cats as clearing collaboration stages:

The World Beyond (天上の世界 Tenjō no sekai World of Heaven)

Add a photo to this gallery
Retrieved from "https://battle-cats.fandom.com/wiki/Shoumetsu_Toshi_(Collaboration_Event)?oldid=382831"
Community content is available under CC-BY-SA unless otherwise noted.