Sinner Snache (インフェルにょろ Inferunyoro) is an Aku variant of Snache that appears in The Aku Realms and Legend Stages.

An average peon that almost any attacker can handle with relative ease. The actual danger posed by Sinner Snache is the potential Aftermath of killing it: a level 1 Surge deep in your lines, which can be problematic if this enemy is present in large quantities or buffed to an extent.

Due to how its most dangerous feature is the Surge that spawns far in front of it upon death, it is recommended to try and kill hordes of Sinner Snaches long before they reach the enemy frontlines, making Crazed Sexy Legs Cat, Talented Dark Lazer and Jellycat highly recommended against it. While countering this enemy should rarely, if ever, be your priority, this same strategy can prove beneficial against most Akus with the Aftermath ability all the same.

Using armies that are mostly made up of Surge-immune/Surge-resistant Cats can also be a strategy worth considering. 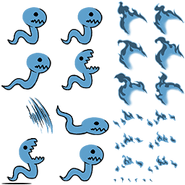