Slime Cat is a Rare Cat that can be unlocked when beating the Advent Stage The Old Queen.

Evolves into Jellycat at level 10.

Because of his extremely low HP (even lower than Cyberpunk Cat at the same level), as well as his long attack rate, he should be used as a suicide bomber dealing massive burst damage for taking out mildly strong peons and also for chipping down/knocking back backliners with his wave. He's very useful in Bakoo, King Wahwah, and Everlord Wanwan's stages as his wave attack gives him significant reach, with enough damage to force them back. Overall, this unit is very powerful, but requires special attention to not die instantly.

Highly effective in stages with Zombies, for they may un-burrow in front of Slime Cat, becoming instantly a safe stepping stone for a wave due to its short attack animation. Frontline enemies with single target or slow attack speed are also fairly easy to use as stepping stones. This unit is also reliable against LD enemies with a sizable blindspot (such as Dolphina, Henry, and Tackey), given that it has a chance to exploit this.

This Cat works well with Cats who can freeze enemies, as well as with Headmaster Cat Jobs and, of course, the Thunderbolt cannon. Time Slime to hit an enemy whose offensive power is temporarily nullified and you can use him against almost anything.

*First stats are 1st form's initial, second and third stats include 300% Empire of Cats Treasures; recharge time may vary.
*Attack frequency is the time between an attack is delivered and the next.
*For units with multi-hit attacks, attack animation is the part of the animation leading up to the first hit.
*Fruit Treasures not included.
*See this section to calculate Slime Cat's stats. 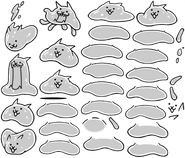