This article is about the Cat Unit. For the enemy unit, see Rampage Cats (Enemy).

Sports Day Cat is a Rare Cat that can be unlocked when beating any stage in Autumn = Sports Day!. Both stat-wise and cost-wise, this unit is a literal combination of three Cats and a Tank Cat. True Form increases range and gains Warp Blocker, but has a longer time between attacks.

Evolves into Kidnapper Cats at level 10.

Evolves into Rampage Cats when obtained from Sports Day Awakens! (may be dropped on the first stage but guaranteed on the second stage) and is level 20 or above.

Sports Day Cat is not an overly useful unit, however, on some occasion, they can come in handy. You could use them as a meatshield in some Cats of the Cosmos stages (units that cost 300 or more only stages) or in stages that give lots of money, unless there are alternatives.

Rampage Cats gain longer range. This turns them into a ranged meatshield that can be used in stages where filling the frontline with cats is problematic, such as stages with Dolphina (Floor 35, No Return Flights) or some Omni Strike enemies. If you're desperate and have issues with frontline enemies like Bore, then maybe Rampage could be useful, as they can present themselves as fodder once your original line of meatshields has died, or maybe even be ranged damage in very early stages.

With all this being said, Rampage is not useless: their range is also their saving grace, in certain conditions. When you are faced with a typical frontline attacker and a wave enemy, like Teacher Bun Bun variants paired with Kory variants (as in Labyrinth of Hades), Rampage's high range will make it so that when Bun Bun pushes into your attackers, Kory will miss his chance to create a wave, as unlike standard meatshields, Rampage will not advance. This is especially notable in Bakoo's Revenge stage, where you really don't want her to hit anything.

Even then, because 330 range is not that high and not really an improvement because of higher-ranged enemies existing, like Professor A. and Othom, meaning that overall, this form is hard to use and rarely viable, like its previous ones. In summary, the largest thing that holds Rampage down is their cost, which is even worse than Jiangshi’s cost effectiveness. Otherwise, their range could be exploited and used in many common stages.

*First stats are 1st form's initial, second and third stats include 300% Empire of Cats Treasures; recharge time may vary.
*Time between attacks is the time from the attack's execution to the start of the next attack (includes backswing).
*For units with multi-hit attacks, attack animation is the part of the animation leading up to the first hit.
*Fruit Treasures not included.
*See this section to calculate Sports Day Cat's stats. 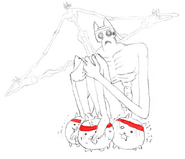 by おくば
Add a photo to this gallery

Retrieved from "https://battle-cats.fandom.com/wiki/Sports_Day_Cat_(Rare_Cat)?oldid=522922"
Community content is available under CC-BY-SA unless otherwise noted.