Not to be confused with Kuwagata Cat.

Stag Cat is a Special Cat that is exclusive to the Switch Version of The Battle Cats. It can be obtained when inputting a serial code from the 9th, February 2019 issue of CoroCoro Comic.

This unit is presumably used as a meatshield against Floating enemies due to its resistance against them. Unfortunately, like with most meatshields, its other stats are highly lacking.

*First stats are 1st form's initial, second and third stats include 300% Empire of Cats Treasures; recharge time may vary.
*Time between attacks is the time from the attack's execution to the start of the next attack (includes backswing).
*For units with multi-hit attacks, attack animation is the part of the animation leading up to the first hit.
*Fruit Treasures not included.
*See this section to calculate Stag Cat's stats. 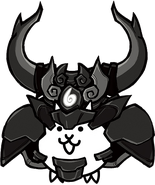 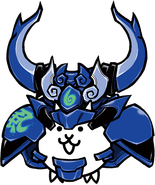