This enemy does not pose much of a threat alone, however it is extremely annoying when supporting other enemies. It screws with your single-target Critical Hitters and absorbs a LOT of hits from your other cats, often spawned in groups just like Metal Doge, but with far less DPS. 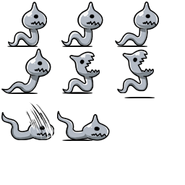