Stone Cat is a Rare Cat that can be unlocked when beating the Advent Stage Prelude to Ruin appearing on the 11th, 12th, 25th, and 26th of every month.

Evolves into Boulder Cat at level 10.

Stone Cat has very high health for its cost but despawns moments after executing its attack. It is optimal for holding meatshield line in that half a second when a powerful enemy unleashes an attack, such as Advent bosses with Omni Strike like Daboo and Black Okame or Surge enemies like Kappy Jr. or St. Dober to delay their advance. This emergency line of defense is also usable on CyberFace, Brollows, and most other slow-attacking or hard-hitting enemies.

Due to its short attack animation, Stone Cat won't stick around for more than the minimum time, though its immunities are effective in preventing it from being destroyed before reaching the frontlines. Like Capsule Cat, he can also be used for starting certain enemies' attack animations; this is useful against ranged foes such as THE SLOTH or Director Kurosawah.

Stone Cat's usage can also be drastically improved with Research Up Cat Combos like Biohazard, Bony Bone, Cheating Heart and Bad Guys, with a recharge time more similar to some of your anti-trait specialist meatshields like Shigong Cat or Ramen Cat. This cat is also ideal for taking out isolated, low-magnification Assassin Bears, as it has a massive amount of health, high speed and only one knockback, whilst dealing just enough damage to kill them immediately.

*First stats are 1st form's initial, second and third stats include 300% Empire of Cats Treasures; recharge time may vary.
*Attack frequency is the time between an attack is delivered and the next.
*For units with multi-hit attacks, attack animation is the part of the animation leading up to the first hit.
*Fruit Treasures not included.
*See this section to calculate Stone Cat's stats. 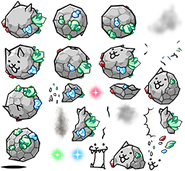