For other uses see, Rei (disambiguation).

Strike Unit R.E.I. is an Uber Rare Cat that can be unlocked by playing the Rare Cat Capsule during the Air Busters Gacha Event. True Form added in the Version 10.2 Update improves her attack rate and resistance against Floating enemies.

R.E.I. has the entire upper hand when dealing with Floating Enemies, as she deal 3~4x damage and take only 1/4~1/5 damage against them.

Take note of R.E.I.'s average range and fast speed, as she can put herself in peril against long-ranged enemies like Le'noir or go ahead of your meatshields. She is designed to counter Queen B, as not only is R.E.I. very powerful and resilient against her, she is also immune to Queen B's slow. R.E.I. is overall very well-balanced, but bear in mind she is less adept against non-Floating enemies just like her anti-Red counterpart. R.E.I. has the same range as Dragon Cat, and should be protected as such.

Flight Unit REI addressed her significant problem of attack rate, and is now more usable as a generalist and against floatings, as it bumps her DPS to about 6K. Additionally, she is now Insanely Tough against Floating Enemies, an ability usually only held by Legend Rare Cats. Overall, her True Form is decent, but nothing that special.

*First stats are 1st form's initial, second and third stats include 300% Empire of Cats Treasures; recharge time may vary.
*Time between attacks is the time from the attack's execution to the start of the next attack (includes backswing).
*For units with multi-hit attacks, attack animation is the part of the animation leading up to the first hit.
*Fruit Treasures not included.
*See this section to calculate Strike Unit R.E.I.'s stats. 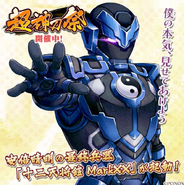 A character from the Kyoto Project similar to Flight Unit REI