Surge Attacks (also known as just Surges), or Intense Waves (烈波 Reppa) in the Japanese Version, are a special ability/effect in The Battle Cats. They can be created by certain Cat Units and Enemy Units at a set chance.

Surge Attacks share many qualities with Wave Attacks: they hit all enemies/cats in their range, but don't affect bases, and they deal the same damage as a normal attack from their creator; they will also retain any special ability/effect that the original attack had, except for Target Only. Unlike Wave Attacks, however, Surge Attacks stay in one spot, dealing the original damage of the Cat or Enemy unit to opposing units within a range of 170px every 1 second.

Surge Attacks have a level, which, unlike a Wave Attack's level, determines how long they will linger on the field for. A level 1 Surge lasts for 20f, and each additional level increases the duration by 20f and allows the Surge to hit the same target one more time. Unlike Wave Attacks, Surge Attacks have a designated area where they can spawn, which varies depending on the unit. This value is independent from the attack range and will determine the minimum and maximum range in which the attack can appear.

DPS of a surge unit can be calculated using the formula: Surge DPS = Base DPS x Surge Level. Following this, a Level 30 Master Uril has a base DPS of 803 and a Surge Level of 3. So his surge carries a DPS of 2409 if all hits connect. This also reflects onto the damage per hit a unit has.

For units who may hit foes with both the main attack and the surge, simply add one to the surge level to get the full DPS of the attack: Maximum DPS = Base DPS + Surge DPS = Base DPS x (Surge Level + 1).

Aftermath is the unofficial name of an ability exclusive to certain Aku Enemies. It is a post-mortem attack, which happens automatically with a short animation once an Aku with this ability dies. Visually, this is represented by a unique Aku soul instead of a regular white soul emerging. This unique-looking Aku soul activates the surge attack before disappearing. The surge, unlike a regular surge attack, spawns directly every time, without the need of a regular attack connecting, plus, since it happens after death, it is not affected by any debuff that may have been applied to the dying enemy before their demise. In other words, there is no way to prevent the surge from happening, nor can the surge be made less problematic by ensuring that the enemy causing it dies with weaken or curse applied. 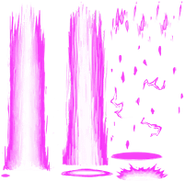 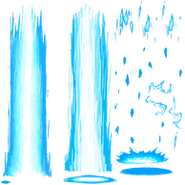 Sprites of an Enemy Unit's Aftermath