For other uses, see Swordsman (disambiguation).

Sweet Food in Another Belly

Swordsman has slow movement speed and a slow attack rate. This form has surprisingly high attack power, reaching a maximum of 50,000 on Road to Kerihime Evolution (Insane), but this all depends on the strength magnification of him in the stage you are playing, and even then it won't matter too much due to his very low health and range.

Even with his increased attack power, his health and range render him extremely easy to defeat. 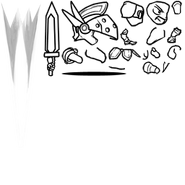