THE SLOTH is one of the slowest enemy units in the game in terms of speed and attack rate, but he can inflict upwards of 8,000 damage on multiple Cat Units.

He can stall your Cats for a remarkably long time, making him extremely deadly, especially when used as support instead of the main threat in stages like Honey Trap, Attack on W-Cyclone and Pitfall Zone, where he easily wipes out your Cats while being protected by either peon spam or other powerful enemies, like White Cyclone, Queen B, and Director Kurosawah.

In later stages however, THE SLOTH usually just becomes a wall with high health that doesn't attack often enough to be a major threat since he's so easy to stall.

THE SLOTH is usually being defended by peons in the stages that he appears in. As such, a good strategy is to lure him as close to the Cat Base as possible, delaying support from other enemies. Whale Cat, Crazed Whale Cat, Mythical Titan Cat and Crazed M. Titan Cat can then be used to deal heavy damage, while usually being able to survive at least one attack.

Do note that while THE SLOTH can easily stall your Cats, your Cats can also stall him, using his advantage to yours. When there is little to no support, simply throwing in periodic Crazed Cats can help stall him while you build up cash for your onslaught.

Alternatively, units with over 450 range, such as Li'l Nyandam, will be able to deal damage to THE SLOTH without being hit by his attack. After completing (and if you have completed) all 3 chapters of Into the Future, Awakened Bahamut Cat can be used to deal massive amounts of damage during his long attack interval, but be sure to time Bahamut well to maximize damage.

THE SLOTH's Enemy Guide entry in The Battle Cats POP! 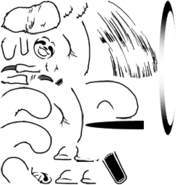