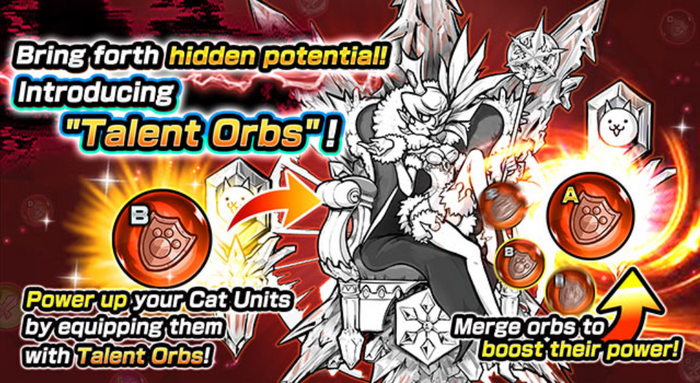 Talent Orbs (also just known as Orbs) are a feature implemented in Version 9.7. This feature allows players to improve the base damage or health of certain True Form Cats against one of many enemy traits. Talent Orbs become available after clearing Into the Future Chapter 3.

A Talent Orb is a type of item which can be given to a unit from the Upgrade Menu by going left in the Talents upgrade screen. Each unit can only hold one Talent Orb at a time. Once equipped, a Talent Orb can still be powered up through merging or it can be removed for 10 NP. Talent Orbs exist in different grades and can be obtained from certain Enigma Stages and Gauntlets or by merging lower-grade Talent Orbs with the exact same type, target and grade. Talent Orbs have a section in the Storage alongside Cats and Catfruit, where they can be merged or sold for NP.

There are currently 65 different Orbs, each with a Grade, Target and Type.

Note: Talent Orbs do not add a target trait to units with anti-trait abilities, but merely increase attack or defense against that target trait. For example: If Roe Cat is given a Defense Up S: Floating Orb, it will be able to resist Floating attacks more than non-Red, though not as much as Red Enemies, but it cannot weaken Floating. However, when Cursed, it'll resist Floating attacks better than Red.

Probability of each Level of Orb from Orb Enigma Stage

Special Grade Orbs are Strong, Massive Damage, and Resistant Orbs. Others are Attack and Defense.

Isle of The Map Lord Schedule

The original set of Orbs