Players have a chance to get Uber Rare characters:

Also get a chance to obtain the Legend Rare unit Legeluga, who has Omni Strike and immunity to most negative effects and waves.

By playing the Rare Cat Capsule/Gacha during this special event!

It is highly recommended getting them to level 10 at least as there is no strategy using their first form. 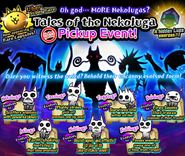 Nekoluga Campaign from past versions (EN) 2014

Start a Discussion Discussions about Tales of the Nekoluga (Gacha Event)