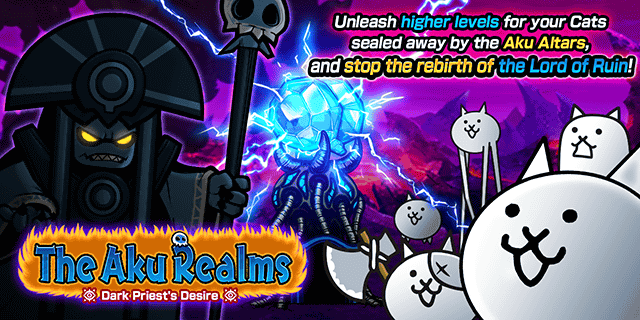 Aku Altars Appear!
Your Aku Research is complete and the Gates of Aku have opened!
Visit Empire of Cats to enter this dark realm...

The Aku Realms (魔界 Makai, lit. "Devil World" or "Demon World") are a special area unlocked after completing Unleashing the Cats, which in turn requires Wicked Cat, Wicked Tank, Wicked Axe to be cleared. To access this unique chapter, tap the spinning portal button labeled "The Aku Gates" above Empire of Cats. The Aku Realms were added in update 10.9.

Thanks to the Empress' Research, the Cats successfully open the gates to another plane of existence. As expected, these lands are dominated by the nefarious Aku Enemies they had previously run into, but are also dotted with evil "Aku Altars" whose magics weaken the Cats to near-powerless levels. As they soon discover, these Altars were the work of a malevolent priest with frightening power and a dastardly plot nine years in the making—"Mamon", not Hargon—who works tirelessly to undo the seals placed by legendary heroes on the god of destruction—"Jagando", not Malroth—in times long past.

Although weakened to critical levels, the Cats battle it out through the Aku Realms and regain their former power little by little, one Altar at a time. Midway through, they reach Mount Aku (Mount Fuji in the Japanese Version), where Mamon attacks them and makes off with the mountain's "crystal of awakening" needed for the final step of his plan. The Cats catch up to him and defeat him once more on the Moon (Iriomote Island in the Japanese Version), only for him to escape once more and the Cats to learn that Jagando has already been revived on Mount Aku/Mount Fuji. But even the god of destruction is no match for an army of weird cats, and with Jagando defeated once more, Mamon loses everything he had worked so hard for, his spirit utterly crushed to where, for the first time in forever, he can finally get his mind off world domination and reunite with his family. The Aku Altars' powerful seals are universally deactivated, giving the Cats full reign in other areas where they may have obstructed their progress.

As the Cats leave the Aku Realms, the Lord of Ruin's egg in their paws, Mamon parts them farewell and sends them thanks for giving him the chance to rehabilitate, but ends his message on an ominous note: "We'll surely meet again, Battle Cats. Just you wait..."

Behold, it is I, Priest Mamon!
Dread master of the Realms of Aku!
...Nice to meet you.

Soon, my nine-year long
quest to bring the Aku Realms
under my total domination will
enter its final stage...

It has been a perilous journey...

I get a little emotional just
remembering all those good times.

Little by little, we have drawn life
force from other realms to weaken
the arcane seals that have trapped
the Lord of Ruin in eternal slumber.

We will add the power of the revived
Lord of Ruin to our legion of evil, and
complete our rule of the Aku Realms.

...what's this??
A weirdly cute army, brimming with
life energy, have broken the barrier
between mortal realms and our world.

The Gates of Aku have opened!

We must seal the Gates before...
What's this? "Meow meow"?!?!
How uncouth! How annoying!

No matter.
Such foolish creatures...
let us call them... "Cats"...
We shall deal with them in time.

There are more pressing matters:
A crystal of awakening has been
found in the caldera of Mount Aku!

We must find it immediately!
With the crystal's power, the ritual of
rebirth for the Lord of Ruin can begin!

And if some fool does dare interfere...
the dark magics of the Aku Altars
will weaken them enough that our
armies can crush them with ease.

A flawless plan! We cannot be stopped!

And so...
The Aku Realms: Dark Priest's Desire
begins! MWAHAHAHAHA!!!!

And so
the freshly awoken Lord of Ruin
was once again sealed into
eternal slumber by the Cats.

Our ambitions of total domination
of the Aku Realms, plotted for
so long... all in vain...

A netherworld ruled
by the Cats, for the Cats...
uniting all planes of
existence in one grand empire.

That was the plan, but...
in the end, nothing really
changed for daily life
among the Aku.

The one big change is that
now all Aku pacts with mortal
beings now include a signing
bonus of extra Cat Food.

But it's none of my business now...

The Seals created by the Aku Altars
to drain away life energy to the
dark Realms have all been dispelled.

From the shadows,
I watched the war between Cats
and the Lord of Ruin unfold.

Just before the Lord of Ruin was
sent back to his eternal slumber,
something came out of his mouth.

It looked like the Cats took it
back as a souvenir. If only I'd
realized sooner just what it was!

And so, several days later...

With my ambitions crushed, I returned
to the mortal world for the first time
in many years. Family and friends,
gathered for dinner and then a
stroll around the smoking caldera...

And somehow, I felt like I could
find happiness in a simple life,
free of domination and destruction.

This is basically a bonus chapter of Empire of Cats, with its own map and stages, but there are some catches. First, the stages become available out of order, with Korea always being the first, but after that, some stages are randomly chosen to temporarily become available for the duration of 3 hours, after which new stages are picked and those that were not completed become unavailable again. Those that were completed stay available forever (this does not include the invasion on Mount Aku/Mount Fuji). Although random, note that the selection is most likely to involve early stages and cannot go too far after the furthest stage that is completed, meaning that after Korea, you won't get stages in the second half of the map. Tap the "Aku Altar Appears!" button at the stage select screen to move immediately to the first of the currently available Aku Altar stages. Tapping the same button again will take you to the next available stage.

The main gimmick of the Aku Realms is the Aku Altar and its ability to restrict unit levels. Cats are originally reverted to level 1 (only during battle) and have their + levels invalidated. After beating Korea, the restriction will rise to level 2 for whichever stage to play next, then increases by one after first clearing that next stage and so on. This continues until the 49th stage is beaten and the level restriction reaches 50, with + levels staying disabled all the way. The order of the stages in the map is irrelevant for this; whichever stage you play sixth will be the one in which your cats will be forced to level 6 and so on. This means that it would be optimal to play the stages in order (by waiting for the next to be randomly picked as one of the available stages), as they are generally in order from easiest to hardest on the map, as one would expect. Not doing so may result in level 10 units having to be used in a stage balanced for level 20 ones, then maybe, level 40 units being available for one of the very first five stages, which would therefore be a free win.

Note that the units used will still keep their current form, meaning that the level restriction only affects the starting stats (Eraser Cat, for example, will revert to level 1, but stay in True Form, so its stats will be higher than a level 1 Tank Cat).

The Aku Realms' stages take place in the same locations as normal, but there is one added stop which appears as stage 30: Mount Aku/Mount Fuji, increasing the total number of stages to 49. This stage drops an Aku Catfruit when cleared for the first time. After completing the Moon/Iriomote stage, you will receive a one-time Gold Catfruit and unlock an invasion in Mount Aku/Mount Fuji, where you will encounter Lord of Ruin Jagando. Complete the invasion to receive a Platinum Ticket, unlock Jagando Jr., and strip the Aku Altar of its ability to disable + levels.

Treasures still take effect here, but there are no new ones to collect.

As its name suggests, the Aku Realms are home to a variety of Aku Enemies, some of which cannot be found elsewhere.

The strength magnifications vary for each Aku, starting out low but reaching endgame levels in the last few stages.

Compared to Zombie Outbreaks, the Aku Realms has more consistency to when and which stages will appear, which is dependent on how many have already been cleared. Every 2 hours and 59 minutes, the game will choose up to 5 random stages and then roll the die for each one; if successful, the stage will become available, and if not, the game will try again after another 2 hours and 59 minutes. The number and selection of stages that can be chosen are based on the player's current Level Seal; the higher the Seal, the greater the range of candidates for playable stages.

Below are the locations of each stage in BCEN and BCJP.