The Battle Cats is the improved version of the original Battle Cats and is available in more than 100 countries (since November 10th, 2014). This version has lots of features, nearly matching the Japanese Version. However, you can not transfer Japanese data over to this version, as they have different servers.

Upon starting The Battle Cats (or playing the intro from the Settings), a short cutscene will explain the story behind the game: 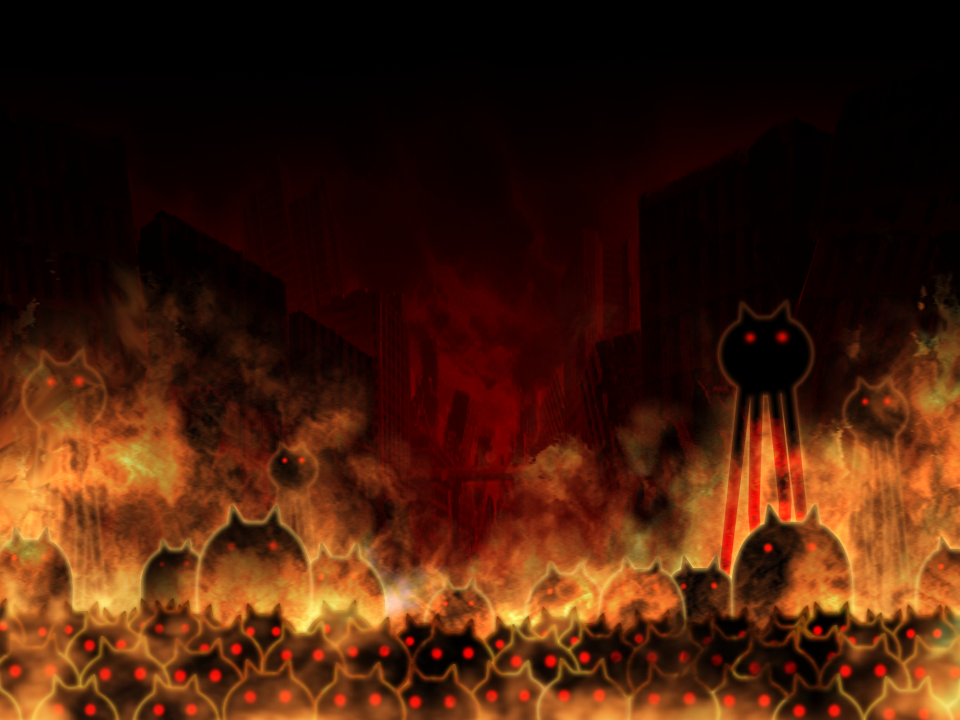 We found it too hard to fight back...because...these Cats...are too cute.

We are powerless to their reign. We cannot stop their legion.

Come to think of it, Cats have already invaded the internet too...We have the best information technology systems and use them to look at Cats.

By the way, the developer of these Battle Cats was interviewed on TV. It went like this...

"Why is the new weapon a Cat?"

"Because I love Cats."

I just read what I've written. It's horrible...so horrible. I've forgotten how bad my writing was.

My biggest mistake was I don't know who I am writing to...

I remember my days as a kid, I wanted to be a major leaguer.

Now...Now I want to be a millionaire CEO of a Social Networking Service.

I mean, if you have money, you don't need love, right?

Whatever the answer is...I want to tell you one thing.

The "Battle Cats" aren't so bad.

After all the battles, the world was overrun by the Battle Cats.

A government of the Cats, by the Cats, for the Cats is the new world!

Or that's what I thought...

In the end, nothing really changed.

Well, if I have to say something, I see a lot more Cats nowadays.

Oh, by the way, I had a "Cat" come into my office for a job interview, he didn't get in.

is just a Cat.

However, I do feel lucky if I see one, in the office or at school.

Thank you for Playing!!

After the Battle Cats invaded the world they moved to the next step of their plan...

I thought what they wanted was to blend into our world and live a cozy and peaceful life..

The Battle Cats took over nuclear power plants all over the world.

They were trying to feed all the world's power into one place!

Their mission was really... Time Travel!

A couple of days ago I ran into The Marketing Manager of the Battle Cats (He was a Cat) and we had a chat, but I don't think he knew what "Strictly Confidential" meant.

So I knew their plan, but I was too busy playing games and going out. Oh, I also paid a visit to my folks too. I'm a good kid.

...and so I forgot about their plan.

We need to release the Legendary Cats!

We need to free them before they were sealed!

We need to travel in time!

We need some Cat Food!

...I think that was what the Cat was saying, Though I can barely remember, because I was pretty drunk too.

Oh right, I was having some nuts with my beer.

So anyway, they succeeded in time travel and the Battle Cats traversed to another world.

...I guess they aren't so bad after all?

Hey, I forgot to add.

You know God, yeah THAT God.

He shouldn't exist in the past... Yet.

And so, having freed the Cats trapped in the lands of Legend the Cats came back to their own time.

Oh, they brought back souvenirs! How kind! .....Chocolate macadamia nuts?? Well, we were hoping for a bit more...

With the help of the Legend Cats the Battle Cats can finally retire and live in peace forever.

..is what I thought, but that didn't actually happen.

Someone accidentally sat on the time machine's button and now the Cats were sent to a weird place no one had ever heard of.

Yesterday, I ran into the Marketing Manage of The Battle Cats (again). I didn't ask, but he told me a lot of top secret info (again).

It seems like where they ended up, the lost Cat Army discovered other Cats dressed like bosozoku biker gangs or members of idol groups with number IDs and other unusual creatures.

It was really hard to tell WHEN the Cats actually were.

They discovered some of the Legends were actually just descendants of the real heroes of Legend.

Naturally, they were too curious and immediately decided to stay. There's no helping it, they're only Cats.

I tried to stop him, but he kept talking loudly. And the next morning, it was all over the news.

Of course, the government immediately demanded answers, but the Cats just hid on top of a cupboard until they left.

Anyhow, it seems the Battle Cats are the undisputed masters of time travel.

Go for it, Cats! You can do it, Cats! Three cheers for the Battle Cats!

Onward... to the Uncanny Legends!

Thank you for Playing!!

On that day, Aliens came to this planet.

But, hey, what's this? Was it just bad timing?

The people of Earth brushed the visitors off like weirdos.

Their revenge on the humans who ignored them took many forms:

Sure, some guys weren't too happy. But lets not worry about that.

Oh yeah, by the way: I've been an alien from space all along.

The changes we made to earth creatures are the symbol of our rule. Lately, you see guys on the street with THAT growing from their head.

Earth has no words to explain what THAT is.

You'd definitely die of embarrassment if you tried to describe THAT.

A real gentleman would never dare mention THAT in public.

That's how awfully shocking THAT is.

Anyhow, I've got 8 of THAT growing on my head.

We had just about invaded every country in the world, but then... some really troublesome guys appeared without warning.

We heard they'd conquered the past... and now they came to invade our future.

There's just one thing I want to say to the Cat Army:

Well, it is true that we sunk Japan...

Well, lets not waste any more time. On to the greatest showdown:

And so... the Alien empire fell before the power of the Cat Army.

A new world has emerged: of the Cats, by the Cats, for the Cats! This life will surely become even more punishing and cruel! Aaagh!

Well, that's what I thought.

But... In the end, nothing really changed.

Well, if I have to say something. Cats star in a lot more TV dramas these days.

Now we have lots of cute "big sister" characters on TV. Aliens became less trendy so we don't get parts anymore.

Hey, do you remember THAT? Well, pushing and pulling on THAT is the new comedy boom.

I just got back from drinking with the Cats...

They were a little tipsy, but they seemed very interested in our planet.

I was cornered for over an hour... They kept asking things like: "Is there Cat Food over there?"

They were so persistent I finally just said, "Yeah, sure!"

Suddenly their eyes were gleaming with childlike joy.

I hear they're building a rocket now.

Anyhow... Congratulations to The Battle Cats!

Onward into an endless universe!!!

How many years had it been since the Great Cat War began? And yet, it feels like I never hear from you anymore. Not even on my birthday.

No words can express the awesomeness that is me.

I guess people are just afraid to get too close to true perfection?

But wait... I just thought of something!!

Could it be? Am I asking for too much from you, my lovely believers?

I heard that lately the most popular holiday destination is outer space. All the celebs are going.

For some reason everyone is totally fascinated with Alien fashion. It's the biggest fad of 20XX.

You didn't hear it from me, but the radiance of the Alien empire reaches even my neighborhood.

Well, those space guys still can't compete with my glory, of course.

It gets pretty exhausting, being followed around by crowds of stylish people begging for your attention. Such is my burden...

The question I get asked most: "Where are your trousers?" But telling would spoil the surprise.

Here's some big news. I just passed by the Cats who headed out into deep space.

They had some really important information for all of you.

Those Aliens... they're actually not such bad guys after all! They're just normal folks like you might run into in your hometown

Still, the Cats have to invade somewhere. And so, the next adventure of The Battle Cats begins now!!!

And do... The Cat Empire achieved total domination of the entire universe.

A splendid galactic federation by the Cats, for the Cats. The cosmos achieved total peace, and unlimited cat food for all.

... that's the official story, but the reality is a little different. Everyone's daily life didn't actually change one bit.

The one weird thing is that all constellations now look like cats. Cats, and only cats.

Or maybe its just me?

Actually, I was at a New Years Party for the Cat Army and Alien Empire. I only went to be polite, but...

These Cats and Aliens just turned their backs and ignored me, talking about time travel, mind control, and all kids of obscure technical topics. At some point, the world went blurry...

I must have had one seltzer too many

because when I came to I was alone.

Actually, I think that was nice of them not to wake me, because I felt very well rested for a week after.

I was free one Tuesday, so I went to the battlefield with the Cat Army to kill some time.

I haven't had such a good time since grade school gym class.

What, you believed me? Of course I'm not serious.

Well, as the Cat God, I can't just leave those guys to lose, right?

And you... you did great, kid. I'm going to grant your dearest wishes. No, not that one, you creep.

You'll see what I mean. Anyhow.

Onward... to the realm of legends!

Thank you for playing!!

Many units have different descriptions, although some reuse old material from Battle Cats. Many new units have been added with the addition of the Cat Capsules and Special Events.

The new English Version has all enemies from Empire of Cats and Challenge Battle and many new enemies found in other areas. Most of the enemies have a different description to be more kid-friendly, as some of the enemy descriptions in Battle Cats were pretty inappropriate.

The New English Version has 3 Main Chapters (each chapter contains 48 levels, which take place in 48 locations, from cities, states, countries, and places in the world, and even the Moon), Challenge Mode and Legend Stages (include time-limited event stages and stories of legend chapters). Version 3 added Into the Future chapter(s), the Cat Combo System, a new gacha event and 2 new sub-chapters.

The story of BCP! is very similar to the story of the mobile game, at least with chapters 1 and 2. In chapter 3 the Battle Cats want to take over the universe.

BCP! has a majority of the early Cat Units from the mobile game, but it is missing some of the cats and their True Forms.

There are significantly less enemies in BCP! than there are in the mobile version, as there is not any Stories of Legend nor any of the event stages.

Retrieved from "https://battle-cats.fandom.com/wiki/The_Battle_Cats?oldid=501945"
Community content is available under CC-BY-SA unless otherwise noted.