This article is about the Special Event. For the Nintendo 3ds Game, see this page.

The Battle Cats POP! is a strategy, tower defense game developed and published by PONOS for Nintendo 3DS. A special launch event with The Battle Cats started on June 27th, 2016.

Finish the stages and get a chance to obtain the event-exclusive Cat Kart R! The more difficult the stage cleared, the higher chance to get this Cat. The player can get this Cat instantly by using a Treasure Radar in any of the stages (you can buy them in the Shop). 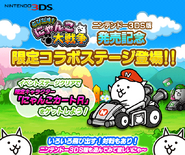