The Thrillerz (スリラーズ Surirāzu, Thrillerz) are a Zombie variant of Those Guys found in Into the Future's Zombie Outbreaks, Uncanny Legends and The Aku Realms.

The Thrillerz are more ravenous than your average stick figure, but in some ways also goofier. The one in front has his arms stretched out ahead of him, constantly flailing them around; the middle cadaver is carrying his own disembodied head; and the walker in the back appears to be hunched over.

Bad posture aside, The Thrillerz have high DPS, burrow twice and revive with 100% HP once. They are usually spawned in much greater numbers compared to other Zombies, acting as a fast-moving barricade for the player's meatshields

Their low HP and Single Target makes them very easy to dispose of, for the most part. Li'l Flying Cat and other strong Area Attackers can easily neutralize them. Be wary of their double burrow, as it gives them an opportunity to sneak up to your backlines and possibly leave a dent in it before they are defeated.

Into the Future Outbreaks

Cats of the Cosmos Outbreaks

Strength magnifications are 150% in Chapter 1. 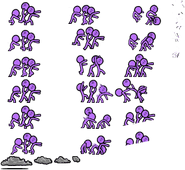