For other uses, see Zeus.

Thunder God Zeus is an Uber Rare Cat that can be unlocked by playing the Rare Cat Capsule during The Almighties: The Majestic Zeus event. True Form added the Version 9.10 Update increases his health and attack power.

Evolves into The Majestic Zeus at level 10.

Zeus is a generally good all-around Uber Rare Cat, but he excels against certain Angel Enemies, such as Sunfish Jones and Angelic Sleipnir. So your best bet is to use him against Angels with low DPS. Additionally, Zeus has enough range to stand safely away from some Angels, like Angelic Gory, Heavenly Hippoe, and Chickful A.

Despite what some people think, Zeus is not great as a general anti-Angel. He is good against the Angels stated above, but other than that he is not a go-to for the more dangerous Angels, like St. Dober, Youcan or Winged Pigge.

He is one of the few Ubers that works extremely well in No Plan A, having generally great damage and being able to withstand several hits from Cruel Angel Clionel.

Zeus's range is one of his strongest points. Sitting at 480 range, he is one of the few units that can safely hit enemies that were specifically designed as Bahamut Cat's counter, such as THE SLOTH and Master A., who stand at 450 and 451 range, respectively.

*First stats are 1st form's initial, second and third stats include 300% Empire of Cats Treasures; recharge time may vary.
*Time between attacks is the time from the attack's execution to the start of the next attack (includes backswing).
*For units with multi-hit attacks, attack animation is the part of the animation leading up to the first hit.
*Fruit Treasures not included.
*See this section to calculate Thunder God Zeus's stats. 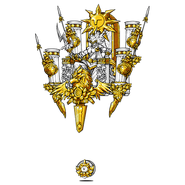 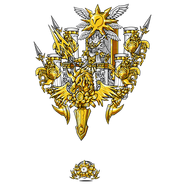 Evolved form
Add a photo to this gallery

Retrieved from "https://battle-cats.fandom.com/wiki/Thunder_God_Zeus_(Uber_Rare_Cat)?oldid=514497"
Community content is available under CC-BY-SA unless otherwise noted.