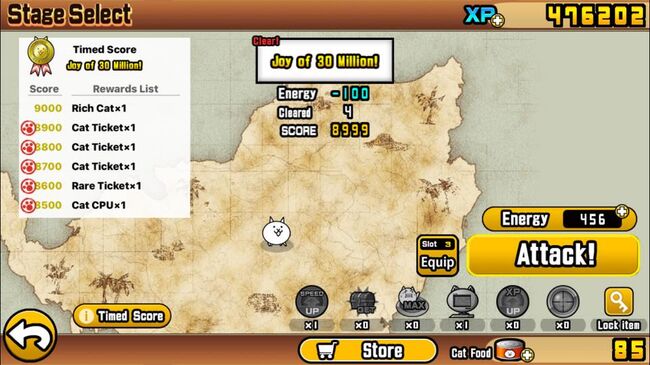 Timed Stage Reward is part of Stage Reward which is granted for players who cleared the designated stage with certain scores. First introduced in the White Valentine 2015 Stages (Sweetest Sorrow Event) (The Survive! Mola Mola! Collaboration Event introduced it in the English Version). At the time cleared a stage, it's possible to win a scoring reward that has been set for each stage. The rewards are always XP, Cat Food, Tickets, Collab Units and Battle Items. In a timed stage, the timer will start when you begin the stage. The rewards are granted only once per star and can be given in same time as other common random, special or treasure rewards.

How to check and obtain the rewards

Retrieved from "https://battle-cats.fandom.com/wiki/Timed_Score_Reward?oldid=267470"
Community content is available under CC-BY-SA unless otherwise noted.